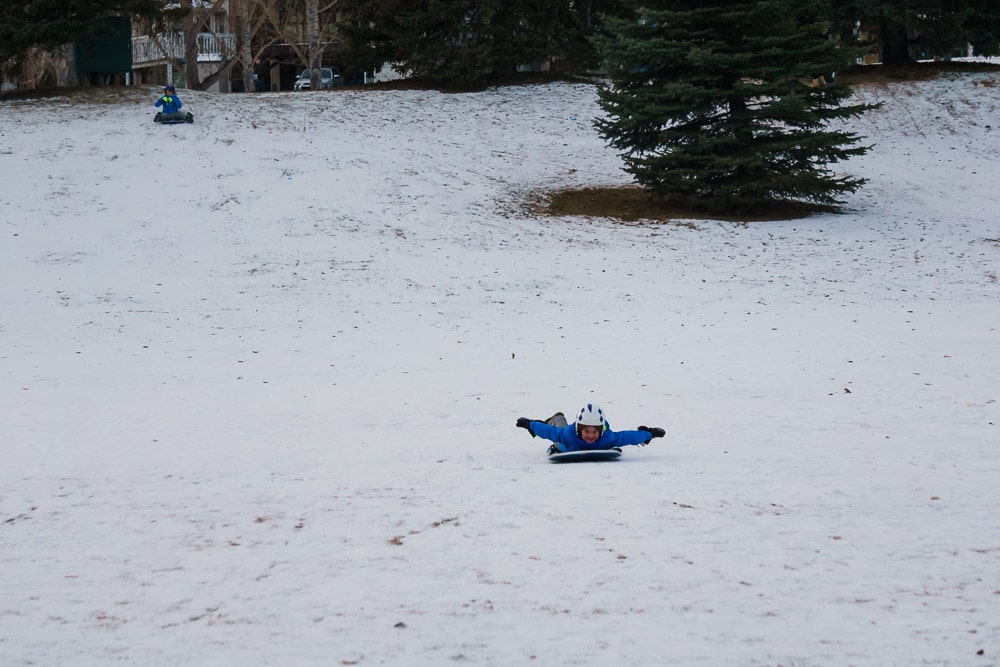 Looking for great winter activities to do in Calgary? There are so many great things to do in Calgary in the winter, and with the current pandemic and lockdown, everybody’s looking for ways to get out of their house and spend some time outdoors.  Those of us in Calgary are lucky to have the beautiful Rocky Mountains nearby, but sometimes you don’t want to spend a day driving and just need an easy activity within city limits.  Here are some great ideas for winter activities in Calgary!

Things to Do in Calgary in the Winter

What more classic winter activity is there in Calgary than skating on a local pond or rink?  There are SO many local skating rinks in the City, whether they’re maintained by the City itself, Adopt-a-Rink volunteers, your local community association, or athletic facilities, there’s probably one or more skating rinks close to you.  A local Calgary Reddit user put together a fantastic map of skating locations in the city, and it sure makes it clear that there’s a lot!

One of many Calgarians’ favourite skating rink is, of course, Olympic Plaza in downtown Calgary.  Olympic Plaza is right in the heart of downtown Calgary and was built for the 1988 Olympics.  It’s the only refrigerated outdoor rink in the City, and it’s a nice, picturesque place to go for a spin on the ice amongst the downtown skyscrapers.  Olympic Plaza is open from November-March (depending on the weather of course) and if you don’t have your own set of skates you can rent them on location. Whether you head downtown or just to your local rink, skating is a great activity for a winter day in Calgary.

In fact, the City of Calgary recently unveiled a new skating trail at Bowness Park which follows the Bow River.  They also have new “ice bikes” that are available for rent.  Unfortunately, this has been a very popular activity during the winter of 2020/2021, leading to lineups, but it’s worth checking out…but maybe go during off-peak hours.

Cross Country Skiing in the City

As we’ve mentioned in other posts, such as our recent one on beginner cross country skiing near Calgary, there are a handful of great city parks that are track set, either by the City of Calgary or by volunteer organizations.  Cross country skiing is a great activity during the winter and one of our favourite things to do outside.   Strap on your cross country skis and go for a spin around Shaganappi Golf Course, Confederation Golf Course, Maple Ridge, or the new 1km track at East Village.  This is such a great way to get in a bit of exercise and some fresh air within the city limits.

All of the trails at the City of Calgary Parks are easy terrain, suitable for beginners.  Cross country skiing within the city makes a great winter activity for a weekend when you don’t want to do the drive out to the mountains, or an evening after work.  If you hit up the trails regularly, consider a donation as many, such as at Confederation Park, are run by volunteers.

Cycling doesn’t have to be an activity that you only get to enjoy in the summer in Calgary.  Often during a Chinook, the pathways will be completely clear, and hopping on your bike makes for a fun change of pace during the winter.

And even without a Chinook, there’s no reason that you can’t cycle year-round in Calgary.  There’s a dedicated community of “frost bikers” that cycle through the winter in Calgary.  Like any winter activity, make sure that you have warm clothes and dress in layers.  Fatter tires are better and studs aren’t a bad idea with the freeze-thaw cycle of Calgary’s Chinooks.

You get to choose how hardcore you’re going to be.  Not everybody has to be like Martin (Pictured above) and frost bike on the coldest day of the winter, but serious props to him for doing so! Set your limit, do what you’re comfortable with.  Or go super hardcore, it’s up to you!

Interested in learning more about cycling year-round?  Local Calgary Herald columnist Tom Babin literally wrote the book on Frost Biking.  Dress up in breathable layers just like you would for any other winter activity and give it a spin!

Tobogganing is a classic winter activity for the young or old and there are lots of hills to slide down in Calgary.  Technically, only the listed on this City page are allowed as tobogganing locations for safety reasons, but odds are you’ll find sledders on some of the other hills as well.   Every time we walk by the hill in Confederation Park there are kids sliding down it.  Don’t have a toboggan?  It’s not too late to order one!

Walk in the Park

Did you know that Calgary has over 10,000 hectares of parkland and natural areas and maintains over 1,000km of pathways!?  That means there’s lots of room for different activities in Calgary, and plenty of room for everyone to social distance.

Whether it’s the local park that you’ve been around a thousand times or somewhere new, bundle up and go for a nice walk.  Visit Calgary has some great recommendations for the best walking paths in the City.

One of our favourite parks, which we’ve mentioned elsewhere in the blog is Fish Creek Park.  Fish Creek is actually a provincial park within the city limits and it spans a large portion of South Calgary.  There’s no shortage of things to do, birding, hiking, cycling, you can do it all in Fish Creek

Another great option if you’re in the North is, of course, Nose Hill which has numerous hiking areas and can be seen from throughout Northwest Calgary.  If you live in Calgary you’re probably already familiar with these two, so if you’re looking for something to do in the winter in Calgary, why not pick a new park and check it out, there’s no shortage!

We’ve written before about our love of birds and with the abundance of city parks in Calgary, we are lucky to have a number of great birding areas.  Grab your binoculars, go for a walk, and keep your eyes peeled, you might be surprised by what you see!

Some of the common birds that you can expect to see during the winter in Calgary are Chickadees, Nuthatches, Bluejays, House Finches, Creepers, Flickers, Downy and Hairy Woodpeckers, Bald Eagles, and of course, Ravens and Magpies.  Keep your eyes peeled and if you’re lucky you might see a Great Horned Owl.  If you need to brush up on your bird identification skills, Birds of Alberta is one of the best books for Alberta.

Some of our favourites parks in Calgary to go birding are Carburn Park, Glenmore Park, and Confederation Park/Queen’s Park Cemetary, but there are lots of great hot spots within the city.  Nature Calgary has a great list of potential birding locations in Calgary here.

Looking for a bit of a drive? Head outside of the city and drive some of the rural range roads during the winter.  Keep your eyes peeled on telephone poles and fence posts and you might get lucky and spot an over-wintering Snowy Owl!