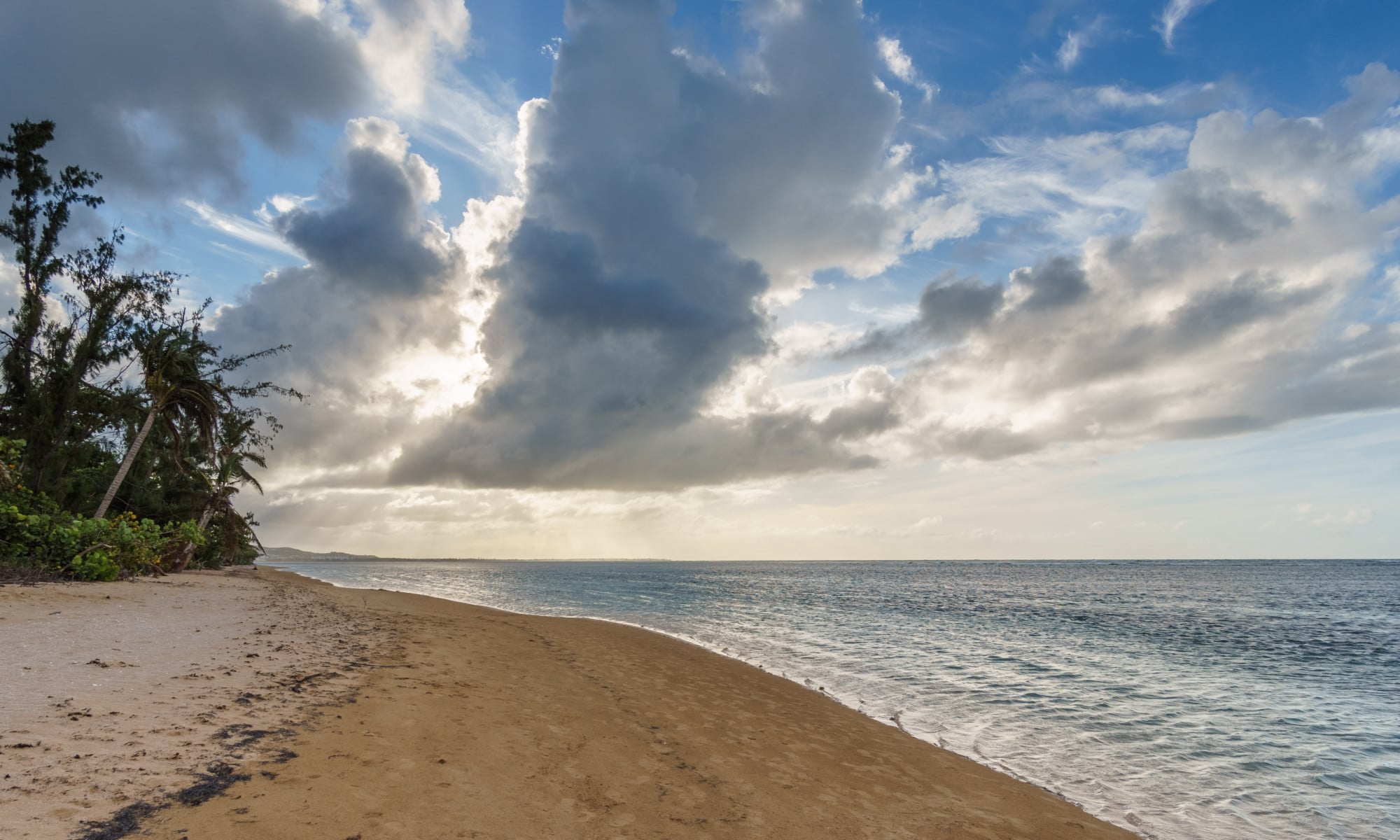 It’s only been about a month since we left it all behind. Getting prepared to travel for 14 months was both challenging and freeing. As we sold off a lot of our stuff, we realised just how many things we had that weren’t missed.  Despite making some progress on clearing the house, we still had a lot of work do to during our last weekend in Calgary. Frantic packing, recycling, and cleaning aside, it was still a worthy sendoff with some nice visits with dear ones before we took our first flight.

We flew to JFK Intl for a brief stopover using our sweet, travel-hacked Priority Pass membership to chill in their lounge and actually enjoy flying for a change. Luxury Travel Hacks for the win! After that, we arrived in San Juan late and took a taxi to the Nomada Urban Beach hostel where we slept in a rooftop tent for some glamping. Before sleeping we were able to find a delicious restaurant called Pizza Pirilo nearby for some wood-fired pizza and Puerto Rican craft beer. The restaurant had been recommended to us before leaving for PR so it was great to find one so close. We highly recommend it if you’re ever in San Juan. There are a few locations so you should be able to find one. They even stayed open a little late for us which was really kind of them.

From there we headed to Yabucoa where we spent to weeks volunteering with All Hands and Hearts. The town was where Hurricane Maria first made landfall on September 20th, 2017 and was ravaged by winds nearing 200 mph. Power was knocked out in the area and has yet to return for some. Worse, many people in the area are of very modest means and can’t repair their hurricane-damaged roofs. The terrifyingly strong winds cracked their concrete roofs which is allowing mould to seep in and make their homes unsafe to live in.  All Hands and Hearts volunteers are repairing roofs, clearing debris, doing critical repair work on things like windows and doors, and removing mould from inside houses. The work is challenging and I don’t think that my hands have recovered from all the hammering and chiselling yet, but it’s also a lot of fun. We met the most amazing people, both Puerto Ricans and fellow volunteers, and have made memories that will stay with us forever.

We have set up a fundraising page and have a goal of raising $1000. We have donated $200 ourselves so our goal is currently $800. If you have any to spare currency of our choice to help the people of Yabucoa, please send it here, we would be ever so grateful!

For our first weekend trip, we went to the super chilled-out, dreamy island of Culebra. The ferry ride over from Fajardo was stomach churning and I emptied my breakfast into 3 bags, while another volunteer filled up 2. We weren’t the only ones and that ferry is notoriously bad, but still, not a pleasant experience, and I’m disappointed that I didn’t even make it through one week of travelling without getting sick.

Everything improved from there. The island is picturesque, features one of the nicest beaches in the world, Flamenco Beach, and has plenty to offer travellers. We went SCUBA diving with Culebra Divers and spent a nice day lounging on the beach. While the reefs weren’t quite as spectacular as the ones in Cozumel, we saw a lot of wildlife and I even spied a rare type of eel! We also enjoyed some fun karaoke at Mamacita’s before heading back on a significantly less choppy ferry.

We worked another week and a half with All Hands and spent our next weekend having lunch at our new friend Olga’s house and going on a random Sunday adventure since the Humacao Nature Reserve was closed. We went to a small beach community that featured delicious-looking seafood restaurants, an abandoned house with weird swastika tiles, and a sketchy Monkey Island excursion where we were told that a family had died (drowned presumably) the day before. We opted against the Monkey Island tour and promptly left that place for Cases de San Juan, a nice beach just outside of Fajardo where we tried kayaking in a crystal kayak where you could see the fish and reefs beneath you.

After 2 more work days at All Hands, we said goodbye to our new buddies and headed to Luquillo for some much-needed beach time and good Wi-Fi! Between the frantic pace of packing up our lives and clearing out the house, as well as the structured schedule of being an All Hands Volunteers, having some RnR in Luquillo was extremely restorative. We enjoyed cooking for ourselves, having some lazy days, and putting together parts of our Ecuador itinerary, all within a stone’s throw of the beach.

We also rented a car one day and drove to the Humacao Nature Reserve where we explored the grounds and hiked up to an amazing viewpoint where we were buzzed by two frigatebirds. As we walked we saw countless other birds including baby herons and the endemic Puerto Rican Tody, as well as lizards, and turtles. Sadly, a lot of the vegetation was destroyed during Hurricane Maria but we did see some coconuts sprouting new palm trees so the area is making a comeback.

From there we cruised up along the coast and stopped at Salidas for seafood lunch before heading back through the mountains which made for a beautiful driving loop.

To finish our time in Puerto Rico we spent a bit of time in Old San Juan checking out it’s ancient streets, castles, and re-uniting with some friends from All Hands and Hearts.

What’s Next for Us

While we’ve only been gone a couple weeks, time moves differently while travelling so it feels like we have been gone forever. We have loved our time in PR so far and Puerto Ricans are some of the most hospitable people that we have met. From Olga throwing a party for us, to homeowners making lunch for whoever worked on their roof, to Lillian who gave us a ride home from the grocery store because she didn’t want us to walk in the rain, this beautiful island is one that will stick with us for some time.  We will update the blog with more content about Puerto Rico but in the mean time we will keep travelling.

On that note, we finally booked our second flight and are now in Quito, Ecuador.   On to another adventure! After over 3 weeks of daily highs in the 30s (Celsius), Quito’s 16 C highs have been rather jarring.

The World in Birbs

In this section, Thea updates her life list with the new bird species that we have seen during our travels so far :

In this section, Philip attempts the impossible task of picking his favourite photo from the last few weeks:

Up next, Quito, Ecuador!