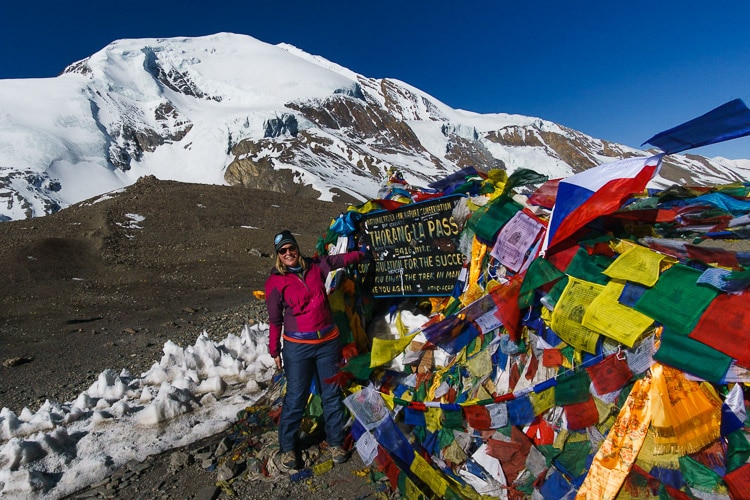 Further to our last trip update, we parted ways in Nepal.  We had both dreamed of hiking in the Himalaya but those dreams required a bit of an adjustment with Phil’s broken foot.  We each travelled solo temporarily so Phil could rest and allow his broken foot to heal and Thea was able to scratch her hiking itch in the Himalaya.  We also spent some time in the jungles of Nepal searching for tigers, rhinos, and Asian elephants.  Read on for more!

After a Yoga Retreat in Pokhara and the unfortunate news that Phil’s foot required another 3 weeks in the cast, we split ways and I left for a 15-day trek along the Annapurna Circuit. The official APC is 160 to 230km long depending on where road transportation is used and takes anywhere from 15 to 20 days.

I opted to do more of an “Annapurna Highlights” trek, thereby skipping some of the lower elevation “green sections” and the windy section between Muktinath and Tatopani after climbing up to Thorong-La Pass at 5416m.

I also added a trip to the “Ice Lake” at 4600m to acclimatize for the challenge of making it over the high point of the trail, as well as a 3-day side trip to the stunning Tilicho Lake at 4919m which ended up being the nicest part of the trek.

Lastly, I ended the trek with a glorious Poon Hill sunrise on day 15 and reluctantly said goodbye to the endlessly picturesque Himalayan massifs. After one last teahouse lunch of dahl bat in Tikhedhunga, my guide Krishna and I jumped on a local bus and made our way back to the city.

Meanwhile, Phil was hammering out blog posts (as you may have noticed!), making friends with locals in North Lakeside, Pokhara, finding the best coffee in town (Perky Beans!), and at the end of the two weeks, FINALLY getting his cast removed.  It was definitely a momentous occasion after being stuck with a cast and crutches for five weeks.  He was given a physio regimen and strict instructions to keep off the foot for two more weeks.

We had met a Portuguese doctor earlier on our amazing Antarctica Cruise and he graciously showed the x-rays that were taken at the time of cast removal to no less than 5 orthopedic surgeons to get another medical opinion.  They confirmed that the foot had a good prognosis for recovery but that it would require another two weeks with minimal weight-bearing before starting to strengthen the foot.  Hiking, unfortunately, was still a big no-no.

Cast off and Annapurna circuit completed we reunited in Pokhara, ate some great meals and sipped good coffee while making a plan to get to the far-flung gem of Nepal, Bardia National Park to try to spot wild royal Bengal tigers. But first, we spent a couple of days at Begnas Lake which is Pokhara’s smaller and more relaxed counterpart. It didn’t quite deliver the peace that we had hoped for and it felt just like a smaller Pokhara, but it was a nice change of scenery nonetheless and worth the 40-minute drive from the city.

Back to Bardia. Now anyone who has travelled to Nepal knows that getting around the country can be…exhilarating. Indeed, not since Bolivia have we had so many hair-raising experiences from the seat of a bus. Think clunky, ancient vehicles chugging along bumpy, winding mountain roads at 30kph. The condition of the roads and vehicles makes it so a 250km trip will take 7 hours and that’s making “good time.”

So when we set our sights on Bardia NP, we felt a sense of dread at making the 12 to 15 hour, 585km journey. Flight options leave a lot to be desired given that you still have to take a 5-hour drive from the airport, and a flight and private jeep was a budget buster. Bus it would have to be.

The mercifully air-conditioned bus pulled out of the station at 1:00 pm and arrived at 5:00 am the following morning making for a 17-hour trip. We waited on the side of the road for our ride to pick us up from where the bus had dropped us off and the whole process took so long that we didn’t make it to our hotel until 6:00 am where we promptly passed out for a few hours. Even ourbest tips for sleeping on an overnight bus didn’t help us this time.

The same day, we walked around the village a bit as Phil was given some “homework” to start putting some very light weight on his broken foot. The village was one of the most peaceful places that we visited in Nepal but was it ever hot. Temperatures were over 40 degrees Celsius every day which made Nepalese beer actually taste pretty good, so long as it was served ice cold.

That evening we hatched a plan with Mr. B to get into the park to hopefully see some tigers, one-horned rhinos, Asian elephants, monkeys, deer, crocodiles, and many kinds of birds without stressing Phil’s foot out too much.

Walking safaris are Bardia’s specialty, where a guide leads a group through both the sal forest and rainforests in search of spots where the animals of the hour like to hang out. Unfortunately, with Phil still walking on crutches, a walking safari would prove to be very challenging, even though you’ll tend to spend more time waiting, than walking.

Our first day in the park, we did a rafting safari down the Karnali river. It was a great way to see a lot of the park, but aside from seeing some deer and birds, we didn’t see any of the elephants, tigers, or rhinos that we were searching for. If we had, we would have been able to get an amazing picture of them from the water, but the animals didn’t cooperate.

The following day we were lucky to be able to hitch a ride with some researchers to a part of the park where vehicles typically weren’t allowed. There we spent the whole day waiting at a popular tiger crossing spot on the river. After about 3 hours of waiting, the majestic creature finally made an appearance and crossed the river in front of us. He was very far away and moved so quickly, but it was a glorious sight nonetheless.

Following that, the elephant that had been hiding in the trees in front of us finally came out and started splashing around in the river.

This poor lad was missing a tail because apparently some people think that elephant tail hair has special healing properties. Just as is the case with rhino horn, it’s really just keratin so go chew on your own bloody fingernails and you’ll get the same “medicinal” effect. So in all likelihood, this poor guy’s tail had been hacked off by a poacher, but at least he still had his life which is more than some elephants get. Also, allegedly an elephant’s tail generally functions only as a poor quality fly swatter so he’s not missing much.

A little while after this picture was taken, his tail intact buddy joined him for a bath in the river and we were treated to a somewhat strange sight as two bulls rarely hang out together like that.

Determined to see more tigers, we spent our 3rd day in the park doing a hybrid walking/Jeep Safari where Thea walked for some portions and Phil rode in the vehicle. Very early into the day, Phil saw a tiger with the Jeep driver, while Thea saw a male chase a deer across the river after only seconds earlier asking the guide what time of day the tigers hunt.

His answer was usually early morning and late afternoon, so seeing a 9:00 am hunt was pretty special! If that wasn’t enough, a female tiger crossed from the same side as her to the opposite side. Philip had the camera with the super zoom lens so she just enjoyed watching the beauty with her binoculars. Since the spot Thea was at seemed like tiger central, Phil joined her there and they waited for a few more hours but no more tigers were seen.

Luckily, once we moved on from that spot the following one had a female tiger just chilling out in the river, cooling off to beat the heat of the day. She stayed like that for a couple of minutes before moving on. That afternoon, we also 4 of the 5 kinds of deer that live in the park, and the rare Giant Hornbill. All in all, a solid day 3 but still no rhino sightings.

I was determined to see a one-horned rhino so I went on a rhino-centric walking safari without Phil and finally got to see one chilling out in his favourite water hole. As we walked to another potential rhino spot, we spooked a deer which then also flushed a different rhino out from his hiding place. Hidden by tall grass, we saw him bound away at a remarkable pace for such a large animal!

Later on, while walking back to the tiger hotspot from the day before, we saw a monkey in the trees who started making an alarm call which I assumed was intended for us and not a tiger. Without saying a word the guide started sprinting away from me so I followed in a panic not knowing if it was a “run for your life” sprint or a “good” run to see cool wildlife. He stopped at a lookout over the river and we saw the butt of a tiger disappear into the grass on the opposite side of the river from where we were standing. While we had rested at that spot, a female tiger had been hiding in the bushes by the riverbank just meters from us!

Following that exciting morning, we left the park a little earlier than usual so I could freshen up before our 17-hour bus ride to Kathmandu. This time we had seats in the first row which aren’t as comfortable as they sound. We both got very little shut-eye between people walking over us constantly to come and go and the loud, cheesy music and Bollywood movies. It is definitely not an advantage to be at the front where you can see just how crazily the bus driver makes his turns and passes. At one point Phil saw the driver weave and jerk the bus to a halt, then go outside and smack himself in the face a few times to wake himself up. And yes, there was only one driver for the journey that took over 17 hours.

We spent the last few days walking around Kathmandu where Phil was able to trade his crutches for a cane. The trip to the monkey temple was the highlight of these few days, which required climbing 300 steps, a good workout and accomplishment for Phil!

Many good meals were consumed and we made sure to have our last dal bat, momos, and lassis but were looking forward to stuffing ourselves with delicious Thai food. After a month and a half in Nepal, we reluctantly boarded our plane for Bangkok with plans to come back and this time, trek together. Once is not enough for Nepal!

We’ll miss the friendly people, delicious food, and amazing landscapes most of all. Now we’re going in the opposite direction, and instead of hiking to the highest heights, we’ll be descending below the surface to hopefully spot our first whale sharks in Thailand.

We’re slowly checking items off our bucket list as our epic journey nears its end. Indeed, it is crazy to think that in a little over a month we will land on Canadian soil for the first time in over a year! Where did the time go?