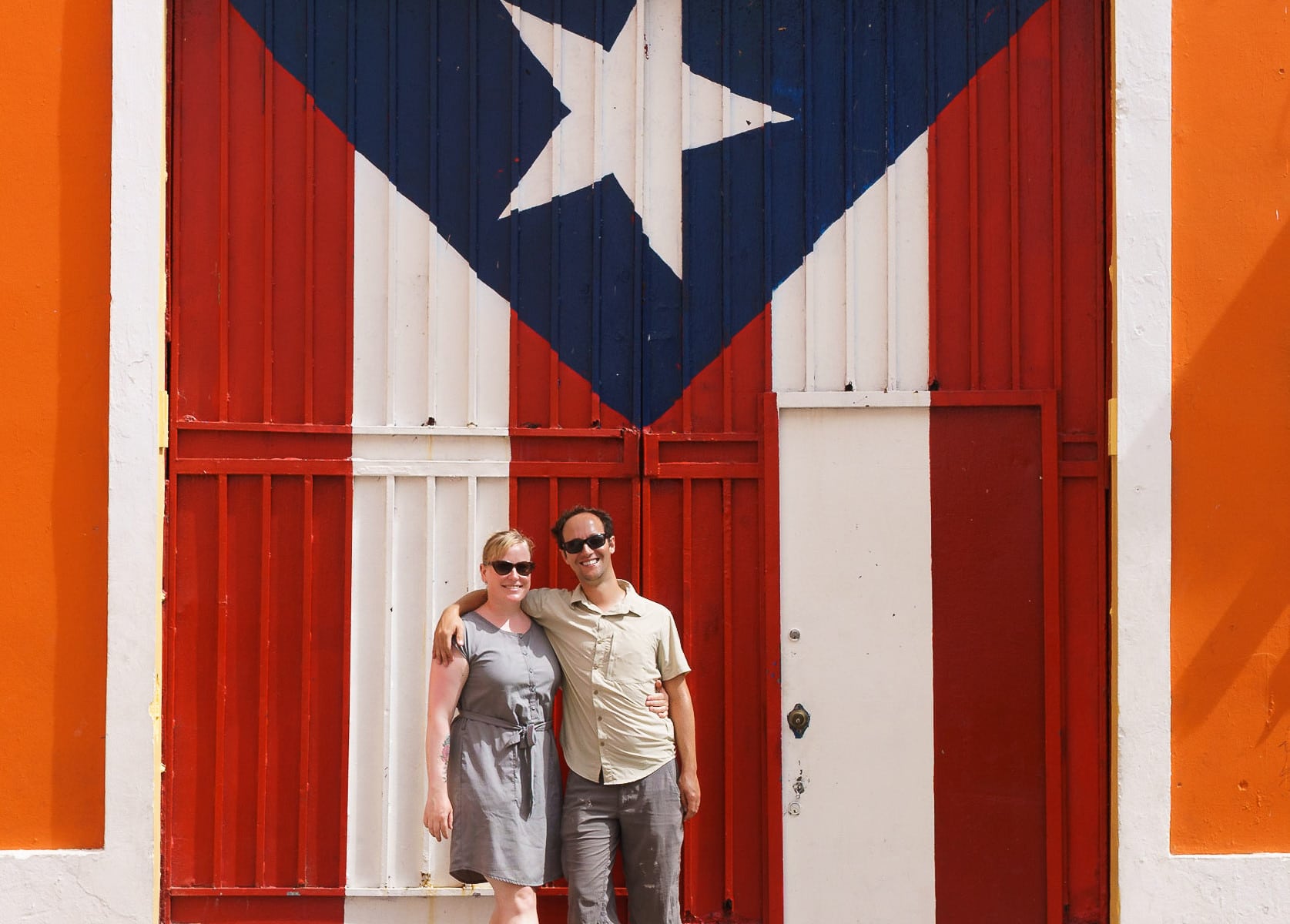 It’s not adios Puerto Rico, only hasta luego. We spent a wonderful 3 weeks in the Caribbean island state and we’ll be sure to come back. From crystal clear waters, to endless white sand beaches, scenic stretches of mountains and coastline, beautiful people, and picturesque towns, Puerto Rico is a worthy destination for any traveller seeking endless summer. As easy as it would be to stay in Puerto Rico, hurricane season is approaching and we’ve got a lot left of places on our bucket list left so see, so we had to reluctantly leave the island behind.

Puerto Rico is Back in Business

Puerto Rico was devastated by Hurricane Maria that made landfall in September 2017, and tourism infrastructure was severely impacted. Tourism is an important component of Puerto Rico’s economy, bringing up to $2 billion USD per year so now more than ever it needs tourist dollars. Having spent 3 weeks there, we can personally confirm that the island is back in business and will be a delight to discover.

Here are our top 5 favourite things that we will miss about Puerto Rico:

1) Beaches
PR has some of the nicest beaches we’ve ever seen, and Bouricans will be quick to tell you that Flamenco Beach on the island of Culebra is on a list of the top 10 beaches in the world. It is a beautiful and peaceful beach with the softest white sand, and endless clear water. There are also kiosks where you can get some delicious empanadas, pinchos (tasty meat skewers), and pina coladas.

We were SCUBA diving on a reef across from the beach and spotted lots of wildlife too. There are plenty of tasty restaurants, and the karaoke at Mamacita’s on Saturday is a lot of fun.

On the windswept beaches of Luquillo surfing is a popular hobby and you may even spot a beautiful leatherback sea turtle like we did. On the calmer public beach you can go swimming, kayak for only $5/half hour, and sip whatever delicious libation that you picked up at the nearest kiosko. The kioskos are made out of shipping containers and are a fun place to hit up after a day on the beach.

The beaches in Fajardo, specifically Cases de San Juan are also picturesque and feature some fun eco-tourism such as hiking in the nearby nature preserve, paddling in crystal kayaks, and touring the bio-luminescent bay at night.

These are just some of the beaches that we visited on the southeast side of the island and there are plenty more to discover. It’s summer every day in PR so any day can be a beach day.

2) Bouricans
Puerto Ricans, or Bouricans are some of the friendliest and most host hospitable people that we’ve ever met. While we worked on people’s roofs, the families were constantly making meals for us or giving us treats of some kind, which was so sweet of them. One of the families even invited a group of volunteers over to their house for lunch on a weekend, regardless of whether they had worked on their house or not. Indeed, the people of Yabucoa will stay with us for a long time. Their community was the hardest hit by devastating Hurricane Maria and as of the end of May some people STILL didn’t have power restored in their homes.

Even worse, recent estimates put the death toll attributed to Maria at close to 5,000 lives. The hurricane has caused immense suffering, which is why we have set up a fundraiser in the people of Yabucoa’s honour that can be found here. Any contribution helps!

3) The food
Puerto Rican food is super tasty! From delicious fried plantains called tostones, to savoury sweet potato mofongo, classic rice and beans, and all the fresh seafood, PR has a dish for every taste.

By far our favourite thing there was the piqué. It is a spicy sauce made with super hot peppers that have been soaked in vinegar along with garlic and herbs. It puts Franks to shame and is something we will be looking to try to make at some point in time to bring a little PR home.

4) The dogs
Peurto Ricans love their dogs and there’s always a cute, fluffy pooch lying around just itching for a belly rub wherever you go. We also want to give a nod to all the cute kitties, beautiful birds, and the cute little frog that says “cookie” which is ubiquitous on the Island. You will miss hearing the coqui frog all the time when you’ve left PR, trust.

5) Old San Juan
The capital’s cobblestone streets, colourful buildings, and fortified walls are an inspiring sight! Wandering the streets is an intoxicating mix of old and new and the Castillo San Filipe del Morro was one of our absolute favourite sights on the Island.  There are craft breweries, amazing restaurants, delicious coffee shops, and fun stores to pop in and out of in the area as well.

Oh, and who could forget the famous painted door? It was made for posing in front of. (see bottom of this post!)

Now everyone knows each country has its charms, as well as its faults, so here are the 5 things that we won’t exactly miss about PR :

1) The driving
People seem averse to turning their lights on at night in PR so it is widely accepted that you should not be out walking or cycling at night, which may have been overkill. We found it to be safe walking around at night, even in Condado area of San Juan which is supposedly sketchy, so who knows. Also, speed limits seem optional, as does signalling. While it’s no Bamako traffic where there are no rules by any means, it takes some getting used to.

Puerto Rico also has next to no public transit infrastructure, which means it can be difficult to get around if you don’t have a rental car.  Taxis and Uber are plentiful in San Juan but getting rides in the more remote areas can be challenging and expensive.

2) The dogs
But wait, I thought you said you liked the dogs? We did. The dogs are super cute, but there’s about a 50/50 chance that you will be bit by one so be careful. We had dogs lunge at us through fences and chase us while running, even nipping at our heels. Volunteers were bitten by homeowner’s dogs as they entered their properties to work on their roofs. Even the chihuahuas weren’t safe. Worse still, is that there are so many street dogs in PR. I heard one estimate that there are over 100,000 abandoned dogs in just San Juan alone. Sad is the only word.

3) The Super Loud Music Everywhere
I don’t know what it is, but Bouricans love playing their music obnoxiously loud. I’m not talking about in a bar or a restaurant, I’m talking about in their cars/on the beach/in their storefront etc. People often drive by with the windows rattling and the tunes blaring at such a volume that I thought that it might make me deaf and I wasn’t even in the car. The worst is what should be a casual beach stroll gets turned into a speaker-off between multiple parties all competing to have the loudest loud speaker on the beach. Yes people actually bring 2 feet tall loud speakers to the beach. I’ve never seen people go to such lengths for loud music anywhere else.

4) Medalla
We had a love/hate relationship with Medalla, PR’s local, cheapo beer. A cold one could be extremely refreshing after a long day working on a roof, but a lukewarm one was effing unpalatable. Its price tag made it something that we bought more than a few times for unwinding with fellow volunteers, but taste wise, it is hardly a beer that we would write home about. That said, PR has a few craft breweries that make a variety of delicious beers which put Medalla to shame, but you can’t find them everywhere.

5) Hurricanes
By far the worst thing about PR is the hurricanes that devastate the island, ruin homes, and claim way too many lives. Maria and her ilk can fuck right off.
All in all, PR is a wonderful place to visit and the beautiful beach vistas, as well as the lovely souls that we met will stay with us for a long time. And while hurricanes may wreak their havoc on the island from time to time, Puerto Rico remains open for business.