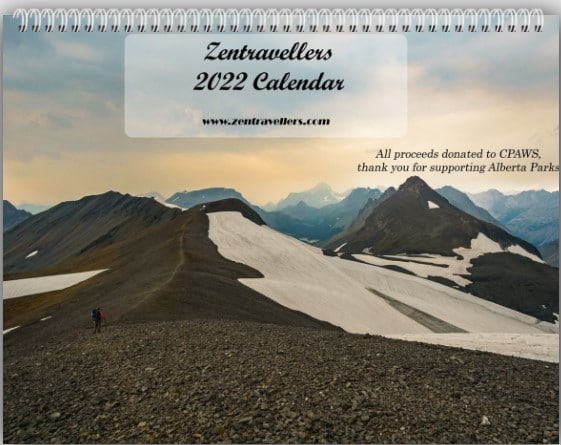 Support Canada’s Parks and Wilderness!  Featuring 13 photos of beautiful natural environments and wildlife.  Most of the photos were taken in Alberta minus a few exceptions in our neighbouring provinces and territories. A list of locations will be included.

This calendar is perfect for your kitchen, home office or as a stocking stuffer for the nature lover on your Christmas list.  So please, order a calendar and we’ll donate 100% of the profits to the Canadian Parks and Wilderness Society.

Last year we decided to sell calendars to help CPAWS in their fight to Defend Alberta Parks and prevent open-pit coal mining on the Eastern slopes of the Canadian Rockies.  We anticipated selling a handful of calendars but wound up being blown away by the response, with your help, we were able to donate over $1,000 and this year we’re aiming for bigger and better!

We sourced a local Calgarian print shop this year and we were able to cut printing costs which means that we can double the donation that goes to CPAWS with each calendar.  So we’ve done our part, now we need you to help out – order a calendar or tell your friends! 😉

The Fight to Protect Alberta’s Wilderness

Albertans won a battle with the “Defend Alberta Parks” campaign, but the fight is not over.  The coal committee is currently consulting on how to develop a “modern coal policy” for Alberta, which may still allow coal mining developments in previously protected lands.  They were recently given an extension to the end of the year based on the volume of feedback that they received from Albertans.  Of course, this engagement was flawed from the beginning and critically, they aren’t even allowed to consider land use or water because it’s not within the committee’s scope. Of course, land and water are two of the biggest concerns when it comes to coal mining on the Eastern slopes.

And it’s not just coal, CPAWS has been sounding the alarm about increased logging allowances in many parts of the province and privatized forest management.  This includes a sweetheart deal with a party donor and logging in sensitive habitat for endangered caribou, and these agreements were swept through without any public knowledge or consultation.

Recently the Alberta Government introduced Bill 79, which amends the Trail Act.  At first glance, it sounds like it’s about conservation, but in reality, it’s aimed mainly at OHV usage, opening the door for private trail management by Off-Highway Vehicle clubs and handing $4.5M to them to do that.  Interestingly, OHV use, which can have devastating consequences on the environment remains free while other Albertans have to pay $90 to go for a low-impact hike or cross-country ski in Kananaskis Country “because there’s no money“.

This fight to protect Alberta’s wilderness is not over and all of the proceeds from your calendar purchase will all be donated to CPAWS to support their conservation work in Alberta.  Buy one (or two, or three!) today!

Shipping: These calendars can be shipped anywhere in Canada!  Want to send one to your family across the country?  No problem! Just let us know the address and we’ll ship it, whether it’s within Alberta, the West Coast or the East Coast!
Want one sent to the US?  Drop us an email at [email protected] and we’ll figure it out.

And if you can’t get enough and are looking for even more photos, check out our brand new print shop!

There are no reviews yet.

Be the first to review “2022 Parks Calendar” Cancel reply