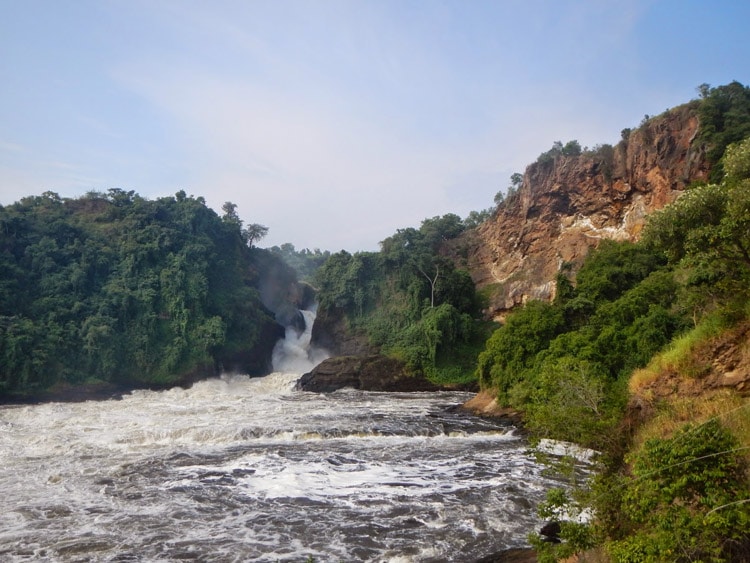 Murchison Falls, which was formed in 1952 is the oldest national park in Uganda.  It is managed by the Ugandan Wildlife Authority (UWA).  Murchison Falls is also the largest national park and protected area in Uganda, covering an area of about 4,000 square kilometres and has a large diversity of animals including the big five, over 450 species of birds, and Uganda’s largest population of Nile crocodiles.  Murchison Falls has several beautiful viewpoints overlooking the Nile River

The Murchison Falls themselves are the point where the Nile River squeezes between the narrowest point of its 6,650km journey  The water is squeezed between a gap in the water of only about 7m before it drops 43m down a gorge and flows into Lake Albert.

The falls are an incredible sight to behold with so much water squeezing through a very narrow opening.  For comparison, Niagra Falls is 51m high.  For width and the famously powerful Victoria Falls are 1.7km wide so you can just imagine the power of all that water rushing through an opening of less than 10m.

Getting to and Around Murchison Falls National Park

Murchison Falls is about 283km from Kampala, the capital of Uganda and the drive takes about 5 hours. Of course, the roads in Uganda are famously rough so it’s best to budget extra time for car trouble or delays.  The closest major community is Masindi. Transportation to the park and transfers from Entebbe or Kampala are typically handled by safari operators.

The Nile River crosses through the park; there is a ferry crossing at Paara and a bridge at Karuma.  Fares for the ferry are 5000 UGx per person and 20,000 Ugx per vehicle.  More details can be found here.

The entrance fee for foreigners is $40 US per person.  More detail can be found here.

Our 2 Day Safari in Murchison Falls

After a long drive from Entebbe, with a stop at the Ziwa Rhino Sanctuary, we eventually arrived at Boomu Women’s Group where we would be staying the night.  Of course, we also had the requisite Ugandan car troubles, leaving us stranded in sleepy Masindi for a couple of hours while our driver sorted things out, but that’s to be expected when travelling in Uganda.

This quaint community is a women-led camp close the Murchison Falls National Parks gate and was the perfect place to rest up the night before entering the park the next day.

We were warmly welcomed, shown our room in a thatched banda and advised what time we could expect dinner. One thing I learned while working in West Africa, is although cold showers are offered, they are not the only way if you ask nicely. Uganda despite being tropical, is very mountainous and can be quite cold at night, so I asked if a warm bucket shower could be arranged. Much to our delight, it could, although we would have to wait until after dinner.

After spending almost an entire day in the car and teeming with excitement from our close encounter with two rhinos at Ziwa Rhino Sanctuary earlier that day, we had some energy to burn. We started walking to a nearby village when our driver Bosco joined us.

As we walked the sky darkened both from diminishing daylight and storm clouds so we decided to run back to camp. It was a funny scene, the three of us jogging in flip flops in the dark under a light drizzle. It was a good thing that we picked up the pace too because it started pouring hard right when we returned to camp.

Our dinner of warmed beans, rice and roasted cassava hit the spot and was especially welcome once the chill from the rain set in.  The warm bucket shower afterwards felt positively luxurious.  We retired early that night and were up on the sun, awakened by the hundreds of weaver birds that call the Boomu camp home.

After a simple breakfast of tea, bread and eggs, we bid adieu to the ladies and noisy weaver birds at Boomu and headed to Murchison Falls National Park for the first day of our safari. When we arrived at the gates, Bosco hopped out to pay the entry fee and we were excited to see some baboons running down the road right by the gate.

This was before we knew what baboons were all about; more on that later.

The park is lush, green and positively teeming with wildlife and after a short drive, we took a ferry across the Nile to see more animals on the other side of the park.

We had our fill of big game animals and thanks to Bosco’s persistence, we were able to see lions as well.  At one point he stopped the car and peered through his binoculars, looking over the entire landscape.  He searched up every tree and in every bush.  After about twenty minutes (we were starting to doubt he would be successful..) he started the jeep and drove over to a lion sleeping in the grass.  Our first lion!  We were so excited!

Noticeably absent compared to other national parks in Africa was the clusters of white safari vans or “jams” at wildlife sightings as everybody clusters around trying to get their photos.  Murchison Falls was refreshingly quiet. There were times where ours was the only vehicle on the track for as far as the eye could see.  Definitely quieter than Maasai Mara or Kruger National Park.

We were amazed at just how many animals there were in the park and at how knowledgeable our guide Bosco was about Uganda’s incredibly diverse array of wildlife. After a long day of driving through the park, we arrived at the stunning Fort Murchison camp which overlooks the Albert Nile, just outside of the park.

There we enjoyed a big, tasty meal and watched the sunset from the roof with a few lukewarm Nile Specials and retired early. After a peaceful first day driving and animal watching in Murchison Falls National Park in Uganda, we were excited to explore the park both by boat and on foot.  Little did we know, our second day in the park would prove to be a little bit more eventful.

We started the day with an early morning game drive and then headed toward the boat launch where we had crossed the river the day before. As we went to eat our packed lunch under a tree, our driver Bosco warned us to “watch out for the baboons!” How could baboons be so bad? We thought naively.

We had not been sitting on the bench under the tree more than a few minutes when a baboon descended on us fast. I spotted him out of the corner of my eye so I tucked the food back inside the bag and folded it over thinking that would stop him, while Philip held the rest of it up high.

The baboon was smarter than my ruse and just grabbed the whole bag, taking the samosa that I really wanted to try. The pancake that was in the bag too fell on the ground so I snatched it back while Phil swung his leg at him in a last ditch attempt to not lose our lunch. His kick was in vain because the emboldened ape just reached back and grabbed the pancake too.

He then perched himself in front of a tree opposite us, flung the plastic wrapper off in one swift movement and smugly enjoyed our lunch as we watched helplessly.

We used to think baboons were kind of cool, but now smarter, we realized they were jerks. The jerk baboon came around one more time until the locals finally showed us how to dispatch him by throwing rocks at his feet. We enjoyed what was left of our lunch in relative peace until I went to throw our garbage out.

The can was being guarded by our old world monkey nemesis. Bosco saw what was happening and took the garbage from me. “Let me throw it out,” he said, “they’re not afraid of white people.” Nevertheless, he armed himself with a stick for good measure and the baboon scrammed at first sight of him.

With the lunch hour unpleasantness behind us, we crossed the river to wait at a boat launch on the other side. Eventually, two boats arrived at the same time. One two-storey booze cruise type thing and one understated, dented aluminum beauty. Ours was the latter.

I climbed, somewhat reluctantly into the small boat not entirely sure it could handle the trip to Murchison Falls, some of the most powerful falls in the world. Our skipper James reassured us that the boat (named “Hippo”) was safe and not to worry about the hippos in the water since “hippo + hippo = hippo”.  I’m no mathematician but I’d say that math checks out.

From the boat, we were able to get so close to the animals on the shore and were plenty impressed by drinking elephants, creeped out by basking crocs, and threatened by hippos.

The Nile boat cruise was an incredible way to do some wildlife watching and our excitement wasn’t over yet. Our captain steered us to the closest point where we could safely view the impressive Murchison Falls.

Hiking to the top of the Falls

As our fun Nile River boating adventure came to an end, our Skipper dropped us off at the beginning of a short hike to the top of Murchison Falls. The hike is straightforward and not too strenuous so most people could enjoy it.

It winds through lush forest and climbs up a cliff to various viewpoints along the river. After our game drive the day before, getting out to hike and move was most welcome and the views were very rewarding.

This was definitely one of the most powerful waterfalls I have ever seen. Other falls may seem more majestic, but Murchison Falls is a worthy competitor in demonstrating moving water’s awesome power.

From the top the mist from the falls floats up and provides a welcome reprieve from Uganda’s daytime heat. Despite our exhaustion, the hike was the perfect way to cap off our second day in Murchison Falls National Park.

While MFNP might not be the first destination that comes to mind when one thinks of game watching and hiking in East Africa, it proved to be a very worthwhile destination on all fronts. The park is quieter than some of the more well-known safari destinations and dedicated to conservation. It’s a must-see for any adventure-loving traveller. Just be sure to watch out for the baboons!