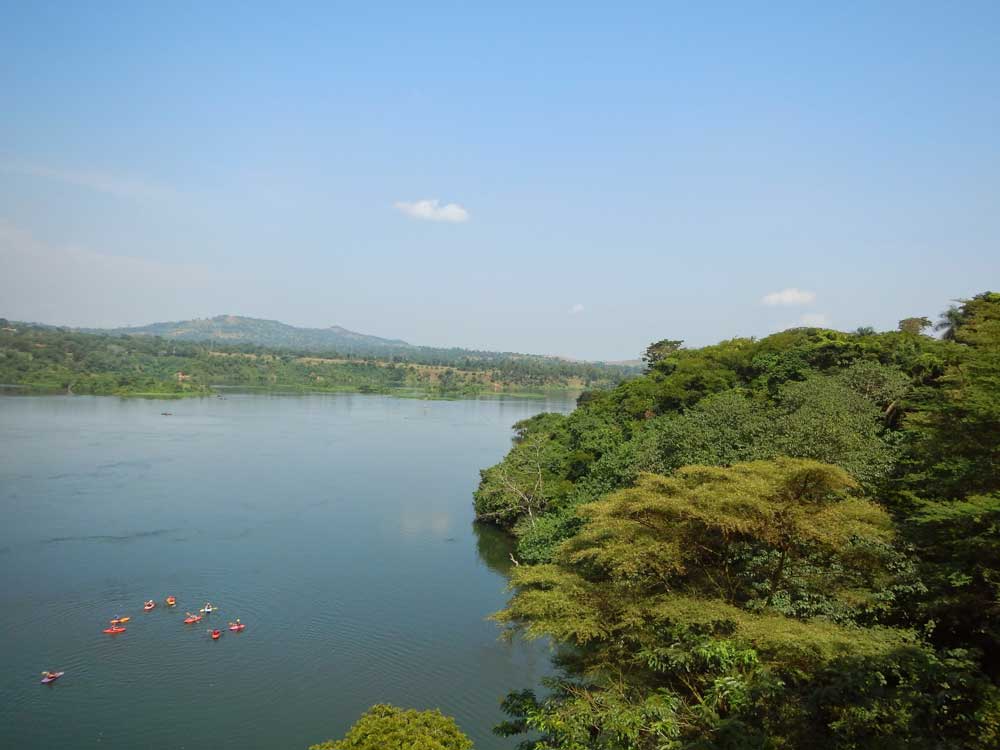 After returning from our five month adventure in East Africa, one of the questions people were inevitably asking what the most memorable part of our experience was.  That has always been a question that we’ve struggled to answer, but near the top of the list is definitely Kayaking the Nile in Jinja Uganda.

The question about what the best part of your trip was is certainly an impossible question to address.  One often struggles to answer it not only because there were multiple amazing parts of the trip, but because travel is so personal.  What may have made the top of one person’s list may not have been some one else’s idea of a good time.

Regarding our trip to East Africa, if I answer this question as honestly as possible, one of the most vivid memories for both of us is of white water kayaking on the Nile, the world’s longest river.  The first thing that comes to my mind is of course, the one that we have next to no pictures of and one of my few experiences you could truly consider “GoPro worthy”

Jinja, Uganda has gained a reputation as the adventure tourism capital of East Africa.  It is located on the northern shore of Lake Victoria, about 80km east of Kampala and it’s easy accessibility from the city makes it a popular day trip or multi-day trip.  Furthermore, the laid back vibe is in stark contrast to the Kampala’s busy streets and the constant “jam”.
White water rafting is probably the most popular activity in Jinja as you can cruise down the Nile, paddling down grade 3 and 5 rapids.  Thrilling!

Kampala to Jinja by Bus

Rather than the more popular white water rafting trips, we opted for a one day introduction to white water kayaking course that would send us down grade 3 rapids on the Nile in the afternoon.

With limited kayaking experience the setting at Bujagali was exceptionally beautiful for learning to kayak and the instructors did a fantastic job of setting our nerves on edge.  The lake beside Nile River Explorers camp was peaceful, especially in contrast to the rapids we would be descending in the afternoon.

The Nile River flowing by Jinja is probably one of the best places in the world to learn whitewater kayaking.  Because the river has been damned and the flow is controlled the rapids are consistent and the water is deep rather than rocky.  If one spills you simply have to exit your kayak at float through the rapids.  Our guides joked that the water is so deep that they could even send Stand up Paddlers down without issue!

My experience with kayaking was limited, so Philip and I were thrilled to be the only two people in the class that day. We received a full morning of one on one instruction from the knowledgeable and enthusiastic instructors at Kayak The Nile. I hoped to stay dry for at least some of the morning, but to my chagrin the lesson began with us practising an emergency underwater exit which would of course, come in very handy later on.

We spent the rest of the morning practising strokes and turns for coming in and out of currents, and a few more emergency exits for good measure. Despite the instructor’s reassurance that I was picking it up very quickly, I was extremely nervous to go through the rapids on a kayak.

In spite having worked up an appetite by paddling the calmer waters on the Nile, the lump in my stomach made eating lunch difficult. All the same, I could not help but feel overwhelmed by the beauty of the setting, and the excitement of learning a new sport.

After lunch we drove about 20 minutes to our launch point on the Nile, carried the kayaks down to the water, and put in. We were not on the river long when the first set of class 3 rapids appeared on the horizon. The instructor told us where to paddle to avoid the worst of the waves but my kayak seemed to head straight for them despite my furious strokes.

I approached the first wave, which was at least twice as tall as me and was sucked straight up it by its awesome force. It all happened so fast but it felt like it was going in slow motion and at one point me and my kayak were vertical and I was paddling into the air.

Finally the wave tipped me over its crest and I landed with a thud in the wake. I paused for a moment amazed that I was still upright and resumed paddling furiously. I was 3/4 of the way through the rapids when suddenly I flipped upside down and found myself head first in a raging river.

It took me a second to remember what the emergency exit procedure was and I reached back overhead first for a way out before remembering that I needed to grab my spray skirt in front. One good tug and I was pushed up to the surface for the most welcome gulp of fresh air.

The safety kayaker helped me back into my kayak and handed me my paddle which I gripped with shaky hands. The instructor paddled over and said “you going over that massive wave was one of the coolest things I’ve ever seen!” and I so wished that I had been wearing a GoPro

“Two more sets of rapid to go” he added and the knot in my stomach tightened. The second set of rapids had a less foreboding look than the first set but there was an eddy I was advised to avoid. Naturally, I ended up right there.

The safety kayaker instructed me to paddle fast and hard to get out of it which I miraculously did without flipping (the instructor later informed me that most people who go in the eddy flip).  By the 3/4 way through the rapids mark however, I started losing steam and was flipped again.

Getting out of the kayak underwater was easier this time, but as I struggled to crawl back in the kayak the instructor tried to reassure me by saying “kayaking is not a graceful sport.” He then instructed me try to maintain more power through the next set of rapids which was the “easiest.”

For those of you have never white water kayaked before, paddling in the rapids takes a lot of strength. You really have to give it your all, funny faces and grunting included. So by the third set, I was getting really tired and flipped again at the 3/4 mark. By this time though, I managed to hang onto my paddle while going over and the instructor remarked that I was getting very good at getting back in my kayak. Maybe even with grace? I wouldn’t go that far.

Meanwhile I should add, Philip who curiously is nicknamed “Flip”, only flipped once in the 3 rapids and still had enough steam to practice edging in an eddy while I waited exhausted by some reeds.

The rest of the journey down the Nile was a peaceful float which allowed me to regain some composure. Even as I write this, I remember the panic I felt as I was being tossed around in the river current and the disappointment of not even making it through one set without flipping.

But I also remember the sheer exhilaration of those moments before and after my flips, as well as the blissful feeling of the sun beating down on my face as we gently floated to our pull out site. While I learned that I need to work on my upper body strength before attempting to kayak through more white water rapids, I also am proud of myself for having tried something new and somewhat scary.

The whole day translated into an epic, memorable adventure and I would thoroughly recommend a day at Kayak the Nile to any thrill seeking travellers out there. Although, you may want to make sure you pay attention to the emergency exit procedure at the beginning of the lesson!