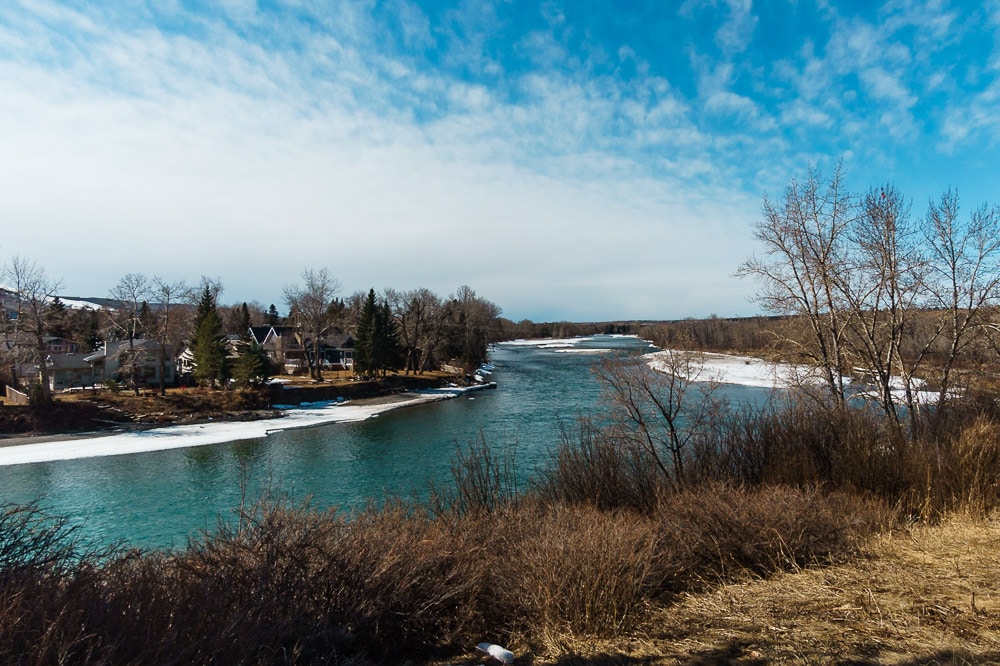 Our second park in our mission to visit all of Calgary’s wonderful city parks brought us to award-winning Dale Hodges Park which is another City of Calgary green space that we had never been to.  It’s a beautiful area and proves that function, beauty, and environmental rehabilitation can go hand in hand.

Dale Hodges Park is in the northwest quadrant near the Bowness and Silver Springs neighbourhoods. It connects to Bowmont Park and used to be called the “East Bowmont Park”.  We were tempted to check Bowmont Park off since we visited part of it, but as we discovered the park and its history, we realized there’s still more to explore at Bowmont so we’ll revisit the rest of Bowmont and do a write-up for that as well.

Dale Hodges Park is a 40-hectare park with a combination of meandering paved mixed-use pathways for walking and cycling, dirt paths that mountain bikers love, and stormwater retention wetlands that delight both people and birds alike. The innovative design even won a Canadian Society of Landscape Architects 2021 Jury’s Award of Excellence!

History of the Park

Adjacent to Bowmont Park, Dale Hodges Park is actually a former gravel pit that’s been turned into a beautiful green space for many people to enjoy. Work to restore the contaminated Kippert gravel pit riparian area began in 2010 and opened to the public in 2019 after which it was dedicated to Dale Hodges, Calgary’s longest-serving member of City Council who devoted his 30-year career to “protecting and creating Calgary’s green spaces.”

Visiting Dale Hodges Park is a delight as pathways follow the Bow River on one side and mixed-wood forests on the other, before reaching the boardwalks through the marshlands where cattails and willows grow freely. Being early spring, the park was muddy and mostly brown, but it offers year-round river views and bird watching opportunities. We saw woodpeckers in the old-growth cottonwood forest, eagles soaring over the river, and ducks paddling about in the ponds.

I can only imagine how exciting the marshes would be in the spring and summer when the migratory birds show up. In fact, we were so impressed with the potential for seeing a diversity of birdlife that we decided to make revisiting the park part of our May 8, 2021, Global Big Day plans.

In fact, the park is considered to be part of a wildlife corridor connecting it to the Bowmont, Nose Hill, Edworthy, Bowness, Shouldice, and Baker parks which only shows that thoughtful city planning can be good for people and nature alike.  If a Big Day is too much for a new nature lover, check out the 2021 City Nature Challenge from April 30th to May 2nd, which encourages people of all ages and abilities to discover the nature that’s right there in the city. It’s completely free to participate in and there are lots of activities to encourage people to learn about their local environment.

Dale Hodges Park is a destination for road cyclists as it connects to the Rotary/Mattamy Greenway, a series of trails that circle the entire city.  Mountain bikers, bird watchers, dog walkers, picnickers, and anyone who just wants to spend some quality time in the great outdoors without leaving the city will find something to enjoy here. While it’s not as big as some of Calgary’s other parks and is lacking certain amenities (ie. bathroom facilities), overall, it’s very much worth a visit for its beautiful path along the Bow River, forest, cliff views, and unique stormwater retention ponds.