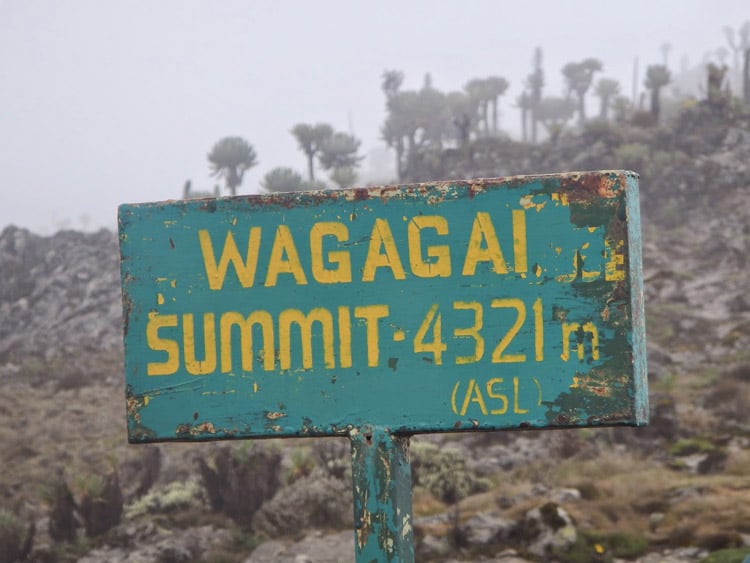 A lot is made of the alternates while travelling. For instance, many recommend you track chimpanzees in Uganda instead of gorillas since it’s less expensive.   but I’ve always wondered if the alternates truly measure up.  We set off to climb Mount Elgon in Uganda to figure out how travel alternates measure up.

Hiking Mount Elgon as an alternative to Kilimanjaro

There are many reasons to choose an alternate over the main attraction. The budget, of course, is a big one. Avoiding crowds is another. So when I read that climbing Mount Elgon in Uganda was considered an alternate to Mount Kilimanjaro, I was very intrigued.

Philip and I had dreamed of summiting Mount Kilimanjaro one day, but we had a pretty jam-packed itinerary during our 5 weeks in East Africa, and weren’t sure Kili was feasible due to both financial and timing constraints. Besides, I try to leave a few things left to see so I always have a reason to look forward to coming back. It’s always good to have something to dream about.

That being said, we still wanted to bag a peak while we were in East Africa and Mount Elgon seemed like a very interesting, accessible and affordable climb and we were not disappointed.

Mount Elgon borders Kenya, has the longest base of any mountain in the world and is home to the world’s second largest caldera. It rises to over 4,321m above sea level and features incredible bio-diversity. It’s no tallest free-standing mountain in the world, but impressive nonetheless and it made sense for our itinerary since at that point in our trip, our next stop was Kenya.

Having come back from a terrible spell of food poisoning in boring Budadiri, the base for climbing Mount Elgon, we finally set out for the trail-head 2 days later than we had planned.

Much to our surprise and my relief from the outset, our guide Moses instructed us and a Dutch couple to hop on the back of some boda bodas to cruise the first 3 kms up a muddy, rutted country road. The drivers managed the difficult terrain expertly, but it left my nerves a little rattled.

They let us out at a little village where we began our trek through the idyllic countryside. Villagers went about their business waving hello as we walked by. The gentle rolling terrain soon became very steep and still recovering from food poisoning, I struggled every step of the way.

Whatever strength I had gained from hiking in the Rwenzoris and gorilla tracking, I lost with that mystery sickness. I tried my hardest to push through it since we wanted to do the Sasa to Sipi Route which meant we had to make it to the second camp that first day.  If we didn’t make it to the certain camp by a pre-set the guide had indicated he would stop us there for the night so we were on a tight schedule.

I took what felt like constant breaks, slowing down our team and worrying that we wouldn’t make the second camp. Eventually, we ran into the British father and daughter team who left the day they were supposed to.

“We were wondering about you guys, but we knew you were coming on account of the MEC backpacks!” the dad remarked, sweat beading off his brow.

“You are very close to being done the hardest part.” His daughter added which reassured me greatly.

I felt relieved enough to carry on and we made it to the first camp with ten minutes to spare and the skies opened up just after we arrived. We hunkered down in the bare bones wooden hut while our cook Xavier prepared our lunch. The soup and tea that he prepared for us warmed us up and we carried on toward the second camp.

After climbing a gruelling 1,600m in one day, our arrival seemed to shock the Dutch couple as well as the 20 German school kids and their porters that were camping there.

“Uganda power!” Moses offered up as an explanation.

“Uganda power!” the porters chimed back in unison, raising their cups of tea towards us.

It felt good to have made it through the first, and hardest day, but it was raining and very cool outside and my stomach was still in twists. I struggled to keep my spirits up while we waited for dinner in the hut with the porters. At one point I told Phil that I would be ok if we went home at that point, That I was close to giving in.

He seemed surprised. We still had the summit and seeing the Great Migration in Kenya ahead of us. But I was tired. My bones ached, my muscles throbbed and I felt weak in mind and body. Why wasn’t I just lying on the beach? I cursed myself for picking such a challenging vacation.

Climbing to the Summit of Mount Elgon

The next morning we began our summit attempt after a decent night’s rest. I was feeling marginally better at this point but still struggled to keep my energy up. Moses knew we’d be slow and had us start an hour before everyone else.  They caught up and passed us in no time.  Once we were in the afro-alpine, the views opened up and we could see some of the strange plants that thrive only on the mountain.

We reached Jackson’s Pool after about 3 hours of hiking and Moses dared us to jump in. I told him that I would consider it on the way back down and he replied by saying that he wouldn’t save me if I started to drown.  Nice!

I figured that since the pool was at 4,050m and we were heading to 4,321m, I remarked to Moses that we must be pretty close to the summit. He shook his head and said no, there was a lot of terrain to cover yet and the route was not direct.

We trudged on for another couple hours through alternating fog and sunshine before finally gaining the summit. The Dutch couple and middle-aged couple that had both passed us had been there for almost an hour already.

The summit was covered in this weird fast-moving fog that made the lighting switch from dark to really bright in a matter of seconds. The views we able to catch in between rolling fog patches were incredible. Peaks and valleys forever. Lush green hillscapes that gave way to towering brown rock formations. We ate our lunch in awe as I pulled out a tiny flask of celebratory Ugandan Waragi gin.

“Uganda power!” I said lifting it up to the sky as the Dutch couple looked on curiously. Philip and I had a swig and offered it to the others. After spending about 45 minutes on the summit, we began our long trek down as the Dutch couple went on to climb and descend another peak that same day.

Once back at the camp which was noticeably less crowded since the 20 German teenagers had begun their descent on the Sasa route, we enjoyed some tea and hot dinner and went to bed early since we had another big day ahead of us.

The Sipi route ends very close to the town of Sipi, but contrary to the promotional material on the UWA website, it does not take you by the picturesque Sipi Falls. That being said, it was marvellously scenic, perhaps even more so than the summit.

But it was also another long, hard day. By then I had some of my strength back and my spirits were better, but we still had about 38km to walk on foot and a substantial amount of elevation to gain and lose. When your guide tells you it’s “up-down gentle” be prepared for anything. Up-down gentle meant climbing to the top of a hill, then descending all the way down to the water and then climbing back up the hill on the other side then descending back down to the water the whole day long.

Still, hiking alongside the caldera was beautiful and the “gentle” rolling hills were truly a sight to behold. We reached the last camp just shy of dusk having hiked for close to 11 hours. As per usual, the flatlanders had beat us there and had enough time to assemble not only their tent but ours as well. Their seemingly endless energy impressed us immensely and it was nice to be in a quieter camp.

We woke to sunshine the next morning and began making our way down and off the mountain. The night’s frigidness gave way to stifling heat as we lost elevation and the sun beamed down on us. The trail descended quickly and soon enough we were back in a thick tropical forest with butterflies and birds fluttering around us. Although we didn’t get to see the beautiful Sipi Falls on the descent, the river valley and plantations below provided nice scenery.

Once off the mountain we thanked and tipped our guide, cook and porter and hailed a boda boda to the beautiful Sipi townsite. The falls are visible from the townsite, but to get a closer view, we would have had to do another hike that day.

We opted to have a nice meal and a warm bucket shower and enjoy some downtime before our hectic overland border crossing to Kenya scheduled for the next day. If we’d had a little more time in Uganda, Sipi is the one place we would have liked to stay longer for the falls hike, the coffee plantation tours, and tranquil atmosphere.

While the last 4 days of hiking had been challenging, they had been very rewarding at the same time. We had climbed to our highest elevation yet, saw amazing sights, tested our strength and resolve, and forged a nice camaraderie with our hiking partners.
While I don’t think it could truly stand in as a replacement for the rooftop of Africa, Mount Elgon is a worthwhile destination for any mountain lover and we were glad that we had the opportunity to climb it.