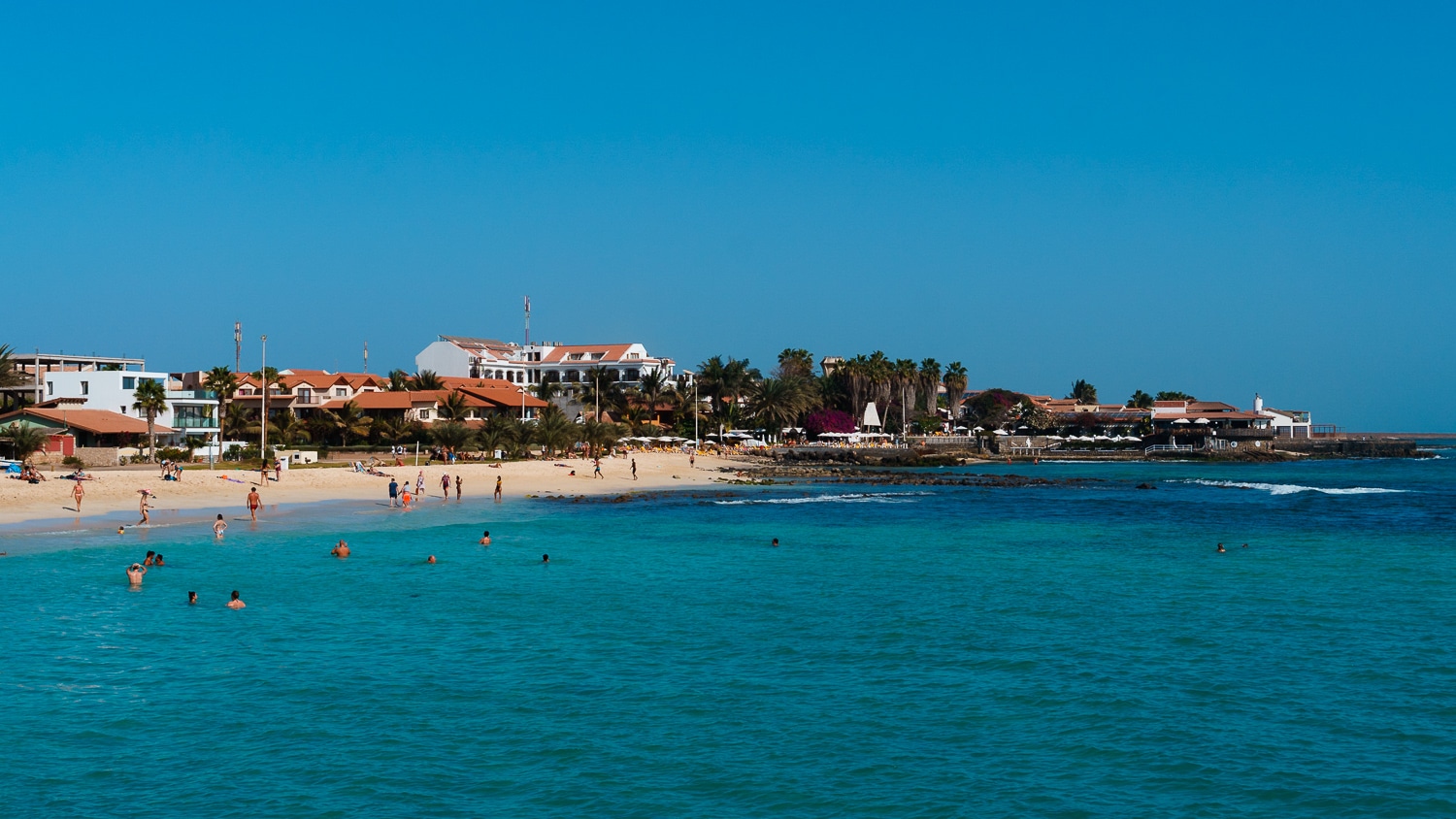 Cape Verde (or Cabo Verde) is a stunning archipelago of 10 volcanic islands in the middle of the Atlantic Ocean.  The island of Sal is the most popular and touristy of the islands and it is a great destination to get away from it all for a week or more.  The following are some tips for travelling to the island as well as some of the best things to do in Sal, Cape Verde no matter how much time you have to relax and explore!

Getting to the island of Sal

First off, Sal is an island about 460km off the coast of Senegal so you’re going to have to fly there.  There are no regular ferries so flying is realistically your only option (unless you’re sailing there or something cool like that!).

Fortunately, flights are fairly affordable, and run regularly.  In fact, Cape Verde is a popular getaway for folks from London as flights from Gatwick are less than 6 hours.  Not bad to get some sun! For those of us in North America, Cape Verde is unfortunately a long series of flights away with transfers (most likely in Lisbon or Gatwick) but it’s certainly a destination worth exploring.

You’ll land at the Amilcar Cabral Airport which as you would expect, is tiny.  The airport is on the south end of Espargos and Santa Maria is about a twenty minute drive away.

Many nations in Europe and Africa receive a free visa for 30 days in Cape Verde (lucky!). Those of us that aren’t as lucky need to pay 25 Euro upon arrival for the same 30 day tourist visa.  As with most destinations, your Passport should be valid for at least 6 months.   More information on Cape Verde’s visa requirements is available here.

Where to stay on Sal

The most popular places to stay on Sal are the town of Santa Maria, Cape Verde on the south side of the island.  Alternatively, many stay in all inclusive resorts.  As fans of adventure travel and learning about the local culture we always recommend staying in a Hotel or AirBNB rather than the isolation of an all inclusive resort but you know your own travel style best.

We stayed at a nice little AirBNB in the corner of Santa Maria that was steps away from the beach.  There are several independent hotels in Santa Maria either right on the beach or close by.

Getting around on Sal

Sal is a very small island, only 30km long and 12km wide, with one main road connecting Espargos, Santa Maria, and Palmeira so it is very easy to get around.  Santa Maria, the most tourist friendly town is not a large town and is easily walkable or bikeable. Taxis are plentiful and cheap, just be sure to agree on a price beforehand as the taxis are not metered.

There is also a small network of minibuses connecting the island.  These service the two main routes of Santa Maria to Espargos and Espargos to Palmeira (and vice versa).  Prices are fixed at about 1 Euro or 100 Escudos.  Buses do not depart until they are full.  The minibus from Santa Maria to Espargos also goes by the airport, simply inform the driver that you would like to be dropped off there.

Unfortunately there is not regular and reliable ferry services between the islands of Cape Verde so flying is your most feasible option if you are aiming to spend time on the other Cape Verde islands aside from Sal.

Cape Verde is a beautiful destination year round.  In fact it sees 350 days a year of sun!  The average temperature for the entire year ranges from 20-25°C so there really isn’t a bad time to visit Sal.  Even during the “Rainy” season from July-October there is hardly any rain.  In fact, one of our guide told us that it only rains once per year and when it does it’s an absolute downpour.

Cape Verde uses the Cape Verdean Escudo (CVE).  Escudos can only be obtained on the island so you will need to take currency to exchange (typically Euros or Sterling would be easiest to exchange).  The fixed exchange rate is 110 CVE to 1 Euro.  Euros are typically accepted by shops and restaurants but at par, so you’re better off paying in Escudos.  There are a few ATMs in each town where you can withdraw Escudos.  Credit cards are not accepted at all establishments so be sure to keep some cash on hand.

Cape Verde is generally considered to be a safe place to travel but please check with your embassy for the most up to date travel alerts.  The most common type of crimes due to the disparity in incomes is petty theft so keep an eye on your valuables and exercise caution as you would elsewhere.  Windows and doors should be locked, avoid flaunting expensive jewellery or electronics, and try not to walk alone after dark.

Most in Cape Verde will be happy to welcome you to their country so don’t let fear of crime stop you, just be a smart traveller.

A Word on Responsible Tourism

Sal is a remote island and tourism is the main income source.  Before it became a major tourist destination Cape Verde was considered a developing nation and tourism has enabled residents to stay on the island rather than leaving to seek income elsewhere.

Unfortunately, what little infrastructure the island has is taxed by the needs of  tourists that come to visit.  Approximately 80% of the food and drink consumed on the island has to be shipped in, there isn’t enough capacity for sanitation services or recycling, and the desalination plant that provides drinking water struggles to produce enough for tourism demand.  On the plus side, Cape Verde is aiming to have 50% of its power generated through renewable means by 2020!

When you visit Sal, Cape Verde it is important that you exercise responsible tourism and do your part to minimize waste, especially plastic.  Try to avoid plastic water bottles (take a filter bottle or boil your water) and don’t leave water running when you don’t need it.  Choose local restaurants and hotels so that your tourism dollars stay in the country.  We absolutely loved the Camara Camara restaurant which is a great local gem just off the main road. We ate there twice!

The Best Things to do in Sal

Alright, now the fun part!  Sal is the most visited island in Cape Verde for good reason, it has a lot to offer tourists.  Here are some of the most popular things to do on Sal Island Cape Verde:

Espargos: The capital of Sal has a very different vibe than Santa Maria.  It’s less touristy and worth spending at little bit of time exploring. Make sure to head up Monte Curral and take in the view of the city.  It’s a steep climb so most do it in a car or as part of a tour.  On a clear day you can see most of the island!

So there you have it, several options that will keep anyone busy in Cape Verde.  Have you booked your flight yet?