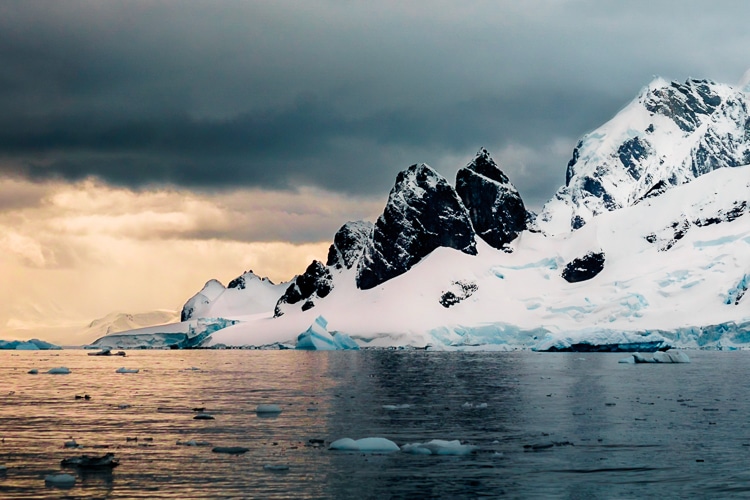 For most of us, visiting Antarctica is a once in a lifetime experience so to ensure you’re able to capture great photos I thought I’d put together some Antarctica photography tips. Whether you’re shooting in manual modes or auto these tips take into account some of the unique aspects of Antarctica and will help you to make the most of your short time on the seventh continent.  I’ve also put together some recommendations on the camera equipment for Antarctica that you may want to consider if you are planning a trip.

Antarctica is a stunning place and it’s one of a kind on our planet.  The landscapes are on a totally different scale than anything we’re used to seeing in our day to day lives and the wildlife is unique and plentiful.  As such, there are numerous opportunities to take incredible photos in Antarctica.  If you’re not looking for photography tips there are a bunch of pictures of penguins ahead so read on! 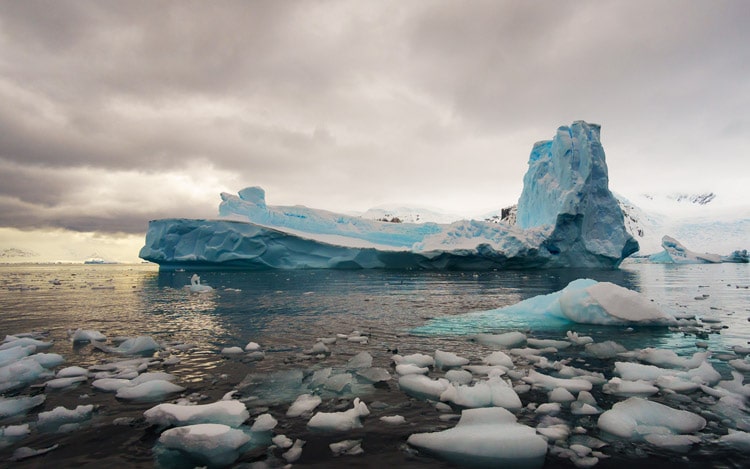 Get a Proper Exposure

There’s a reason Antarctica is called the “White Continent”.  98% of the land mass is covered in ice and all of that white can confuse a camera’s metering systems.  To make sure that the snow is actually white it’s often recommended that you set your camera to Spot metering and overexpose your photos, sometimes up to two stops.  If you are shooting in an automatic mode, set your camera to snowy scenes and it will make the necessary adjustments for you.

Now, how does this work in practice?  On our Antarctic Cruise I followed this advice, but I would recommend being very careful with overexposure.  You can up the exposure a little bit if the scene is very white but if you blow out the highlights you can’t recover that detail.  Check your histogram regularly and keep in mind that you can also increase the exposure in post-processing.

Another way to make sure that you get the shot is to bracket your shots.  Take one normal exposure and one set to overexpose.  You can choose which one works best when you’re back on the ship.

Antarctica is not only a harsh environment for people, but for technology as well.  The biggest danger to your camera is likely salt getting into its internal components which could cause a lot of damage quickly.  Pack a waterproof bag, keep your wits about you in Zodiacs, and be wary of splashes.  If your camera and lenses aren’t weather sealed you may even want to consider purchasing a waterproof cover or at least, following the poor man’s method by cutting holes in a Ziploc bag.

I had read that condensation can be a camera killer in Antarctica and was quite concerned about it but in my experience, it wasn’t too much of a problem.  The weather during our landings was relatively warm which eliminated the problem, but if it’s cold it’s a good idea to have a large Ziploc bag available to seal your camera in before coming back into the warm environment of the ship.

The Ziploac bag will seal the cold air in with your camera allowing the temperature to rise slowly without causing condensation inside your camera.  Because our weather was fairly tame I didn’t bother using the Ziploc bags I had with me after the first day and just left my gear in my camera bag. I did take the batteries out for a bit before using it on the ship, just to be safe.

If you don’t normally shoot in RAW consider changing your settings to JPEG+RAW for your Antarctica cruise.  RAW files retain more detail giving you more ability to edit them or fix mistakes.

This is the trip of a lifetime and it’s not easy (or cheap) to go back to Antarctica and re-take your photos.  Even if you don’t use RAW files now you might decide to take it up later and if that’s the case you’ll wish that you had more than just the JPEG.   Buy some extra SD cards and consider packing a portable hard drive as RAW files take up considerably more space. 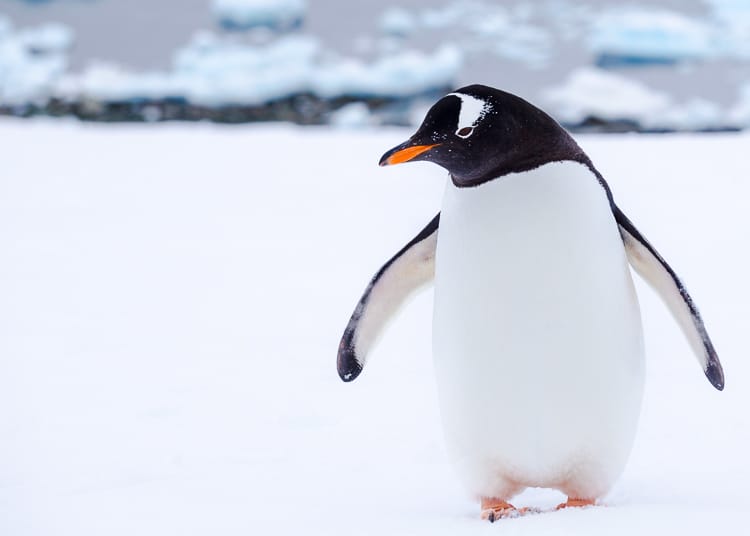 Normally I’m careful about using the highest burst mode on my camera because it fills up the memory card very quickly, but in Antarctica I set my camera to high burst (12 frames per second on my A6000) and fired away.  Sure, it’s a pain to sort through all those photos afterwards and pick the best ones but travelling to Antarctica is a once in a lifetime opportunity for most of us.

I’d rather delete a bunch of photos afterwards than come back from the cruise wishing I had captured that perfect moment of a penguin swimming or a whale in action.  Make sure that you take lots of SD cards and be careful about filling up your camera’s buffer.

Keep your camera at the ready

Of course, you should have your camera with you during excursions to the Antarctic continent but it pays to keep it handy on the ship as well.  You never know when you’ll sight a whale alongside the ship, a seal sleeping on a chunk of ice or a particularly picturesque iceberg.  Sea birds are a regular sight following behind the ship through the Drake Passage as well.

If you do spot something you won’t have time to run down to your room and grab your camera before the moment passes so keep it on you and ready.

Back your photos up!

Pack a portable hard drive and load your pictures on to them regularly.  It would be a nightmare to lose your photos after spending thousands of dollars to get to Antarctica so make sure that you have a storage system that works for you.

Ideally, you’d have two hard drives as it’s best to have photos stored in multiple places but that may not be feasible.  At the very least I would urge you to pack one.  If you brought your laptop with you on the trip something like a Seagate Backup Plus or Western Digital Passport is perfect.  If you’re not travelling with your laptop there is usually one available for use on the ship.

When you’re taking photos of penguins it’s often best to get low on the ground and snap your photos on the same level as them.  It’s not unheard of to see people kneeling or even lying on the ground to get their shot.  Just keep in mind that you should sanitize your knees when you get back on the ship as you might be kneeling in penguin caca.

IATO rules mandate that visitors stay at least 5m back from the penguins, but if they come closer to you that is allowed.  Staying low helps make you less intimidating so they’re more likely to approach.  Some recommend sitting quietly a bit away from the main group, you might get a close encounter from a curious penguin!

When you’re on the zodiac I found that the front is often the best place to take photos.  Drivers will do their best to position the zodiac so that everybody can take photos but I found being in the front helped so that you didn’t have to shoot through somebody else’s head. If the zodiac is stopped the people on the far side of the zodiac can usually stand up but be sure to ask your driver for permission first. 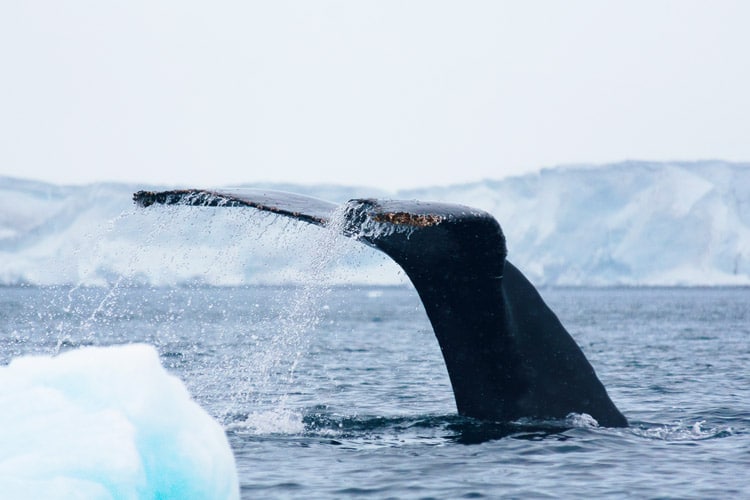 Show some scale and consider your background

Icebergs and glaciers in Antarctica can be simply MASSIVE.  Add something to your photo to showcase the scale of the Antarctic landscape.  That might be a zodiac, the ship, mountains, or other people, but without something to add scale to the photo it’s hard to really understand how large the ice that you’re looking at is.

The same goes for penguins, they’re small and you might want to experiment with photos that show them in their environment or photos that have people in them to contrast their height!

My last tip before I get into camera gear for Antarctica is probably the most important.  BE CONSIDERATE.  I know you’re excited to take a million pictures of the cutest penguins you can imagine but please be considerate to your fellow passengers.  There is lots of time for everybody to get their photos so try to be aware of where other people are and what they’re doing.

What camera gear should you take to Antarctica?

If you have two camera bodies I would recommend going on land and your zodiac cruises with a wide angle and a telephoto lens as you don’t want to be changing lenses once you’re off the ship unless it’s a very calm day and you’re quick.

For lenses, I used a Rokinon 12mm and a Sony 55-210 telephoto with a 1.7x teleconverter the most. At times I had to screw the teleconverter off because the penguins were too close but I was still happy I had it to get really close when needed.  To switch things up and get a different perspective I swapped the 12mm lens for my Sony 35mm during some of the landings, but the telephoto was the mainstay.

Most don’t have the luxury of two cameras so you may want a versatile lens that can handle a bit of both.  If you shoot with a Sony Alpha camera and have the budget the Sony 24-70 G Master and Sony 70-200 were very popular choices on our cruise.  If you only have one body and want to get it all done with one lens the Sony 18-105 or Sony 18-135 are both great options.  You’ll sacrifice a bit of sharpness with an all in one lens but they’re convenient and versatile.

If you don’t have a Mirrorless Camera or DSLR and don’t want one, I would recommend purchasing a higher end point and shoot camera for the cruise.  You can have a lot of fun using your smartphone’s camera for things like time-lapse videos or the odd penguin selfie but they’re a bit limited in terms of quality. The cost of a camera pales in comparison to the cost of the cruise itself cruise and if you’re just using your cell phone for photos you may end up regretting it.

A capable point and shoot like this would help you come back with better pictures than a cell phone. If you want to go all out, a superzoom like the Sony Cyber-shot DSC-RX10 IV is pricey, but it’s an all in one solution that takes fantastic photos.

I didn’t take a tripod and think it would have been a bit unwieldy on the zodiac.  If you take one, make sure that you sanitize the tripod legs before each landing.

We all know that the weather can be cold in Antarctica so carry extra batteries and keep them warm in an internal pocket.  You’ll be taking lots of photos so packing extra SD cards can’t hurt.  Make sure that they’re cleared before your landing as you wouldn’t want to be spending time deleting pictures off the camera rather than enjoying your time with the penguins!

Leave your Drone at home as they are not allowed in to fly over Antarctic waters or the continent unless you have a permit.  Drones have the potential to disturb wildlife and others’ Antarctic experience.  And frankly, too many of them crash and wind up in the ocean.

Anyways, that’s my list of tips and gear advice.  Hopefully they were helpful!  If it was (or if it wasn’t), let me know in the comments.  If you haven’t gotten enough of Antarctica, check out our complete guide on booking a last minute cruise to Antarctica!

2 Replies to “Antarctica Photography: 9 Tips to Capture the Best of the Seventh Continent”