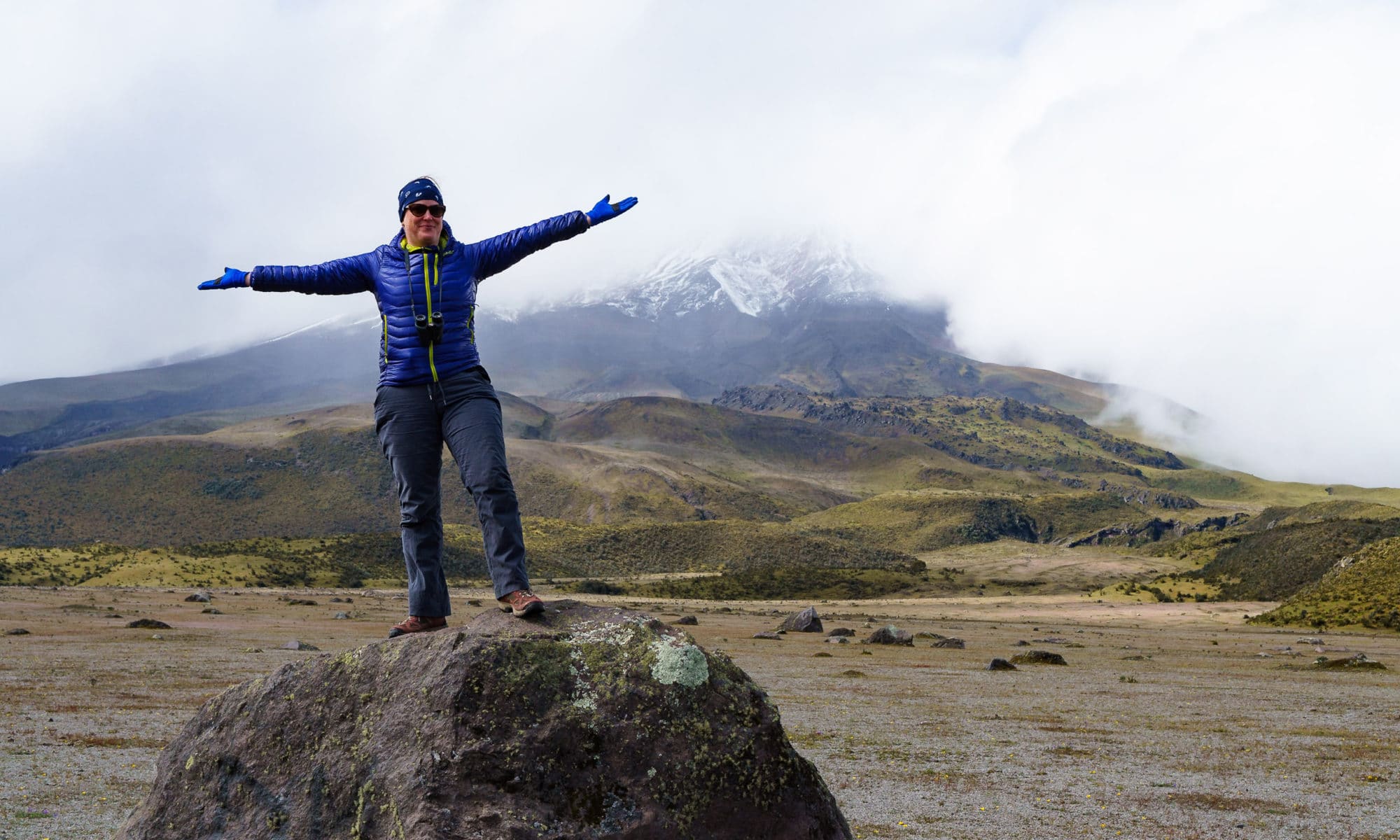 We are 3 months into our 14 month trip around the world and a ton has happened since we started. We began our trip by volunteering in Puerto Rico and then spent about a month in wonderful Ecuador, the country that truly has it all. From Pacific coastline to snow-capped volcanoes, the living laboratory of the Galapagos Islands, cosmopolitan cities like Cuenca, and the Amazon rainforest, there’s something for everyone in Ecuador.

We flew from San Juan, Puerto Rico to Quito via Florida. Enjoying yet another one of our perks of being Wealth Simple Black members, we used our VIP Airline Lounge access to enjoy a free meal and some drinks before our flight to Quito (use this link to get your first $10,000cad managed for free!). Once in Quito, we did exactly what you’re not supposed to do and took an unofficial taxi for $20usd vs an official one for $26. The ride was fine and the driver was really nice, so all is well. Ecuador used to have a reputation for having shady taxi drivers that would use any opportunity to rob you blind, but we never had any issues with taking taxis during our time there. Well, aside from them not using the counters when they’re supposed to but that happens in a lot of places. Indeed, it seems like Ecuador’s tourism infrastructure has improved greatly in recent years and many of its previous problems remain in the past.

We spent our first couple nights in Quito at Friend’s Hostel in Old Town and enjoyed a free walking tour with staff from the hostel. We also took a jam-packed, double volcano tour day tour organized through the hostel where we saw both beautiful Cotopaxi and Quilotoa volcanoes in the same day. This tour was only $85usd per person when organizing them separately would have cost $50usd per person for each one. We left early in the morning for Cotopaxi National Park, where we picked up an excellent and knowledgeable local guide along the way who helped us reach the refugio at 4800m and pointed out local plants and wildlife.

Next we headed to the Quilotoa Volcano through some beautiful high mountain roads where you can see the Kechwa people practicing their traditional farming methods. There is a small Indigenous village at the top of the volcano where you can buy local crafts and sample traditional Ecuadorian cuisine. We had a tasty lunch there and picked up our Kechwa guide who led us down into the volcano. Now this is where Mr. Zen and I had our first major disagreement, with him thinking that Quilotoa was the more beautiful of the two volcanoes and me favouring Cotopaxi. Quilotoa to me was no doubt beautiful, but I couldn’t stand the hot, dusty, crowded, and completely stinking of mule shit hike down into the crater. I hated it so much, that I turned around halfway and had fun picking out a sweater in the market at the top instead. Cotopaxi was rugged and wild just like the Western Canadian parks that I’m used to so I loved it more. Philip didn’t like that Cotopaxi was very foggy and for a lot of our time there we couldn’t even tell that the famed volcano was there. That said, the clouds did clear enough for us to get some good views of its staggering 5897m peak which was good enough for me.

After the volcano tours, we headed to the beautiful birding hotspot of Mindo. There we ramped up my lifelist in record time and helped nurse a beautiful, rarely-seen female Andean Cock of the Rock back to health after she was hit by a car. We wished that we had a few more days in the area to explore it a bit more, but the Amazon called.

Spending a few days to recharge in the Mariscal Foch area of Quito before heading to the Amazon, we drank our weight and blew our budget on delicious craft beer. We took ourselves on a pub crawl buying flights at each of the microbreweries in the area. All was good and well until we ended up at Cheruska Cerveceria Artesanal Alemana  Pub where we accidentally ordered a flight of 4 FULL-SIZED pints. You just can’t waste good beer like that, so we stayed up late finishing them all. Our hostel sucked (Blue Hostel, don’t recommend unless you like daily forced 6am wake-ups and sleeping in places with a dungeon-like feel) and we couldn’t sleep the beers off. Bleary-eyed we wandered around the Mariscal area a while until we finally accepted that it was only really a place that came alive at night. We headed to Quito’s lovely botanical gardens and walked-off the night before.

Our next adventure was a 5 day tour of Ecuador’s Amazon region in the Cuyabeno Nature Reserve. This wild and rugged sojourn helped us recharge and enjoy some amazing wildlife viewing including the rare freshwater Amazon river dolphins, countless birds, several different kinds of monkeys, and wild caimens. The best was yet to come though.

From the Amazon, we took a few days off to get organized in Old Town and prepared for our highlight of Ecuador, maybe even best trip ever, our 2.5 weeks in the Galapagos Islands. We originally planned to only spend a little over a week there, but we liked it so much that we changed our flight back and stayed an extra week which allowed us to explore Isabela Island, as well as Santa Cruz and San Cristobal. Best of all, it only cost us $34 in change fees, thanks TAME!

The Galapagos are an incredibly special place with extraordinary landscapes, endless wildlife viewing opportunities both on land and underwater, and such a wonderful chilled-out vibe that as we commiserated with other travellers, we all agreed that being in the Galapagos felt like we were taking a vacation from our vacation. While our hearts longed to stay, our budget said we’d better GTFO if we actually wanted to make it around the world. So after almost 3 blissful weeks of diving with hammerhead sharks, getting thisclose to gregarious blue-footed booby chicks, indulging in Super Crazy Happy Hour, and sea lion sunsets, we reluctantly waved goodbye to the enchanted Islands.

We spent one brief night in Old Town again, before taking a way too long of a bus ride to the beautiful southern city of Cuenca. Nestled in the foothills of the Andes, this cosmopolitan city with colonial architecture is heralded as Ecuador’s “most beautiful” City. We’re not much for cities when travelling so we only spent 3 days in Cuenca, but we did enjoy its beautiful riverside pathways, the Pumapungo Museum that includes an archaeological site and gardens, and the opportunity to satisfy our inner hipsters with delicious GOOD coffee (not that cafécito crap that gets tossed around too much in South America), kombucha, and craft beer on tap. We made sure to have one more Salcedo ice cream treat too which is a brilliant invention that features 4 different flavours of ice cream layered over a blackberry syrup center before we left too. We stayed at the cozy Casa Rumi Bead and Breakfast which we highly recommend because of its convenient location and delicious vegan breakfasts. Don’t get us wrong, we love a good slab of meat now and then, but Gary’s cooking proves that eating vegan can be delicious too.

Let’s leave this recap on a high note, because from here we took a nightmarish 12 hour overnight bus ride from Cuenca to the barren hellscape that is Northern Peru.

Ecuador blew up my life list and there were even birds that I didn’t write down or felt like I couldn’t 100% guarantee the ID, but here’s my best estimate:

It’s hard to pick a favourite photo from Ecuador because there were so many great photo opportunities.  Tourism Ecuador’s slogan is “All You Need is Ecuador”, and that’s pretty accurate.  The fact that one small country has such a stunning variety of wildlife is insane.  In fact, Ecuador boasts 10% of the world’s biodiversity!  There are lots of photos of birds and wildlife that I could put in this part but the photo that stands out for me is this sunset on San Cristobal Island in the Galapagos.  But, there is always wildlife in Ecuador, and if you look closely you’ll spot a bunch of sea lions sleeping on the beach!

Stay tuned, our next update will be on the next month of our trip in Peru!